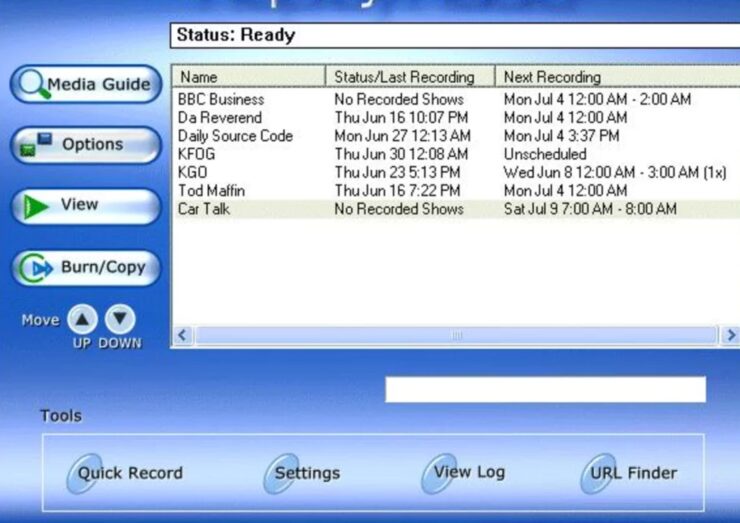 Replay Radio 8 Editor’s choice! – is the EASIEST, most POWERFUL way to AUTOMATICALLY capture/record, schedule and convert streaming Video or Audio delivered to your PC. With Replay Radio you can RECORD audio/video streaming from the Internet (like video clips and music), or audio/video from a variety of devices like TV Tuner cards, Webcams, or radios – just about anything attached to your computer:

ALL the popular formats are supported, including Windows Media, Real Audio/Real Video, Streaming MP3, Flash Animations and Flash Video. Plus, Replay Radio includes an audio recorder that can record ANYTHING you can hear.

There’s no better way to take control of your Media. And best of all, it’s really EASY to use. 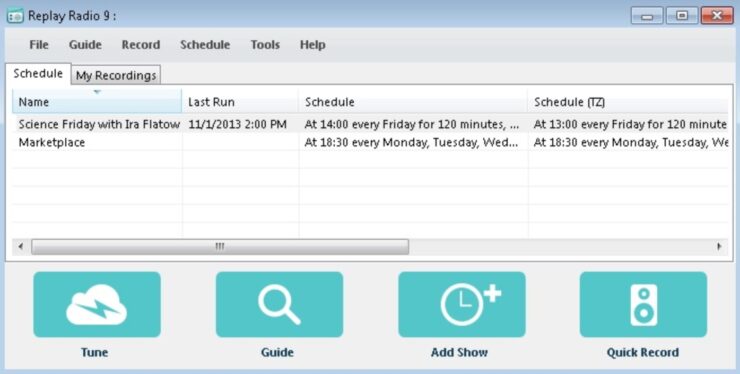 Replay Radio makes it easy to capture (save to hd) all types of online media. You can record streaming audio, radio, music and streaming video instantaneously, or schedule recordings to happen automatically later. Plus, the integrated Replay Media Guide lets you PICK Radio Shows, Radio Stations, TV Stations and Podcasts to record with a SINGLE CLICK.

All the POPULAR formats are supported, including:

Plus, Replay Radio includes an audio recorder that can record ANY sound produced by your sound card. And it can also record from Webcams attached to your PC, TV from TV Tuner Cards.

The Most ADVANCED Recording Technology

Replay Radio is THE ONLY software that combines Stream Capture, Audio Recording and an Enhanced Podcast Client in one EASY-TO-USE interface.

The benefits of this technology are enormous – you can capture multiple streams SIMULTANEOUSLY (download 10 or more streams with most broadband connections), and you get PERFECT reproduction at the smallest possible size. Besides Replay Radio has SPECIAL customizations for MySpace, YouTube, Google Video and other video download sites. Plus, unlike audio recording programs, no background noises creep into your recordings, and the sound card remains FREE for normal use. Replay Radio also converts captured audio to .MP3 or iPod bookmarkable .M4B files.

Audio Recording records ANYTHING you can hear on your PC, and saves it to MP3, WMA, WAV, OGG, AAC file on your hard disk. This means that you can record ANY format, even ones that haven’t been invented yet. And it’s GREAT for making personal copies of Audio Books or other content. You can record XM Radio and Sirius using this method, too. Special output options like Eliminate Dead Air and Compressed Speech make Audio Recording even more USEFUL.

The Enhanced Podcast Client built into Replay Radio gives you EXTRA capabilities the big guys can’t do. ANY podcast can be converted to a bookmarkable file on your iPod (so you can return to the place you were last listening). BitTorrent (p2p network) Podcasts are supported. You can download individual episodes with ONE CLICK. There’s a lot more, too.

Replay Radio is really EASY TO USE

Despite all the power under the hood, setting up recordings is very simple: Just open the Media Guide within Replay Radio, pick your show, station or Podcast, and it’s automatically scheduled for recording. The Integrated Replay Media Guide contains:

If you have an iPod or another MP3 Player, Replay Radio has some very HANDY ways to copy files to your device. For iPods, you can make Bookmarkable .M4B files, which let you make bookmarks in long audio files. All recordings can be AUTOMATICALLY copied to any MP3 Player including iPod or iTunes.

Applian Technologies Secure Ordering – 100% Secure Purchase
The order process is protected through a secure connection. Your personal data is encrypted and cannot be accessed by a third party. We do not record your credit card information.
Orders are processed by Authorize.net