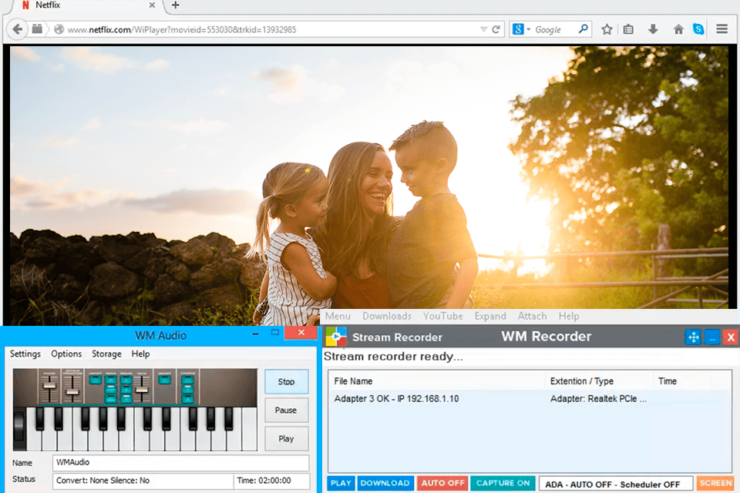 WM Recorder 10.x is the first and only software tool that allows for one-click recording of audio and video streams from your Windows Media Player. It’s perfect for music videos, music, radio broadcasts, adult and subscription content, corporate webcasts, and anything else. WM Recorder ñan record more Windows Media streaming video and audio content than any other stream recorder.

WM Recorder 10 is fun and easy. Simply open WM Recorder, click Record, and play the video or audio you want to capture. Files are saved on your PC automatically for playback anytime. With WM Recorder, streaming content doesn’t disappear. It stays for as long as you want it.

WM Recorder 10 works by watching internet activity relating to Window Media Player, and assembling the streamed data as an ASF file, which can then be played using Windows Media Player on your PC or many portable devices.
WM Recorder can record almost any Windows Media Stream (asf, wmv, wma,…). Other non-asf media files as MP3, MPEG, AVI or WAV can also be recorded.

In some cases only WM Recorder in the PRO Mode can record a Windows Media stream because it is the only stream recorder using a proxy cache to record what Windows Media Player is playing!

Record more Windows Media streams than any other stream recorder, including MSN Video and JumpTV.

Unlike many other VCR style recorders WM Recorder can record at the highest quality on slow connections, build and record playlists, record multiple streams at once, and more.

Unlike many download managers WM Recorder allows you to watch partially downloaded streams!

As a VCR style recorder WM Recorder is extremely easy to use. With just one click, any streamed Windows Media™ link is saved as a recorded file on your PC automatically.

The resume Recording function allows you to restart recording from where you left off. This only works in an URL Mode. Note: Only seekable streams can be resumed. Continuous (live) streams cannot be resumed.

WM Recorder also supports accelerated downloads – you may download up to 5x faster than before.

Cannot convert to other file formats besides ASF, although this may be added by the developers to future releases. There are some publicly available programs which will make MP3 files or other formats from recorded ASF data.

Can not Record RealMedia and QuickTime streams (See RM Recorder for more).