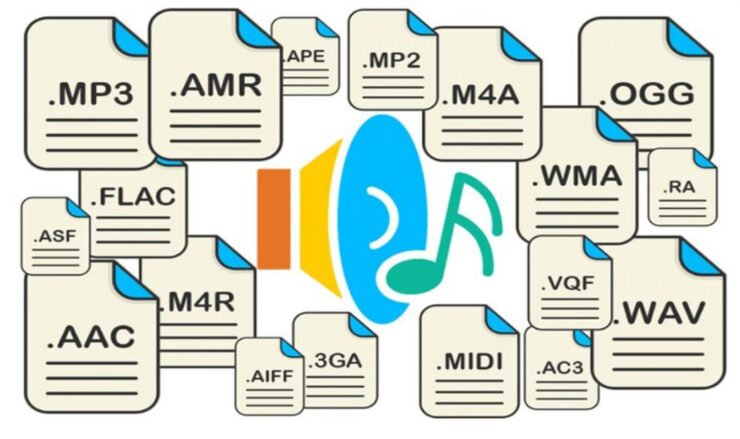 MP3 was introduced as a part of the official MPEG-1 standard in 1992 and until today it is the most successful audio standard since WAV. The German Fraunhofer Gesellschaft (FhG), which has developed this audio-compression still holds the key patents the MP3-techology inherits. The development started back in 1987 at the Fraunhofer Institut Integrierte Schaltungen as project EUREKA EU147. The final compression algorithm became later known as MP3. In April 1989 Fraunhofer applied patent on MP3 in Germany and it became part of the MPEG-1 standard in 1992. It was in january 1995 when Fraunhofer applied patent on MP3 in America as well and it was granted in November 1996. Using MP3-compression PC-users were able to compress an ordinary music-CD to one tenth of it’s original size – thus 12 hours of music could be stored on a recordable CD that on the other hand could be played by an MP3-CD-player or an ordinary PC. What made MP3 that popular in the end was the online peer-to-peer program named Napster. Millions of songs were exchanged every day via the popular program. That was solely possible by MP3, because conventional formats such as WAV or AU were way to big in size with similar quality. MP3 also offered like WMA later the big advantage of being streamingable (not all of the file has to be downloaded to listen to it).

Microsoft’s respond to MP3, the Windows Media Audio-standard. As it is part of the Windows Media package, Windows Media Audio 8 was presented in early December 2000 and it is until now the best Windows Media product. Windows Media Audio among other things is firmly integrated in Microsoft’s Windows Media Player. Microsoft promises with this version almost CD-quality with just a third of the source-file’s size. Above all WMA offers the advantage that copyright-protected songs cannot be published any further (Digital Rights Management). That’s not the only reason why many music- and movie-corporations meanwhile decided in favour of WMA instead of MP3. Like MP3 WMA is almost predestined for the internet by offering streaming capabilities (see MP3 for details) both with WMA and WMV (Windows Media Video).

The development of the OGG standard began in 1993, then known as “Squish”. OGG was right from the start of an open-source project and hence is free of any patents. It was designed as a substitute for MP3 and WMA and by now it is almost as popular and well known as MP3. Above all, the algorithm is still being developed what is mainly due to its flexibility. Although the sound-quality gets better with every further development the files are backwards compatible and can be played with older players as well. Like MP3 OGG offers encoding at variable bitrates. Using this compression parts of the song are encoded with a higher compression than others what depends on the source. Most times, this compression goes along with squishy noises or even small interruptions. OGG is also one of the very few formats that support multi-channel compression. Surround-files could theoretically be compressed with more than two channels. OGG is, like it’s predecessors, streamingable and although the used player has to support this feature, it’s one of many good reasons for OGG.

It was back in 2000 when another audio-standard was “given birth” and since then struggles for the users’ favour. VQF, however, suffers mainly of two things: first it is hardly known anywhere and second it takes the PC about three to four times longer to convert a song in VQF than in any other format. At a bitrate of 80 kbps VQF promises the same quality MP3 does at 128 kbps – this would mean that VQF-files would take 30 % less space. Unfortunately it takes twice the CPU capacity to play VQF than MP3.

mp3PRO is the next generation of MP3. A divison of the Fraunhofer Institute is working on this together with Thomson multimedia. mp3PRO is said to offer the same quality of MP3 at half the file size. This is achieved by a further compression of a tone’s high frequencies. This SBR (Spectral Band Replication) is believed to be almost loss-less and represents the PRO in the name. Sooner or later mp3PRO will take the place of MP3 as a common standard. Like WMA mp3PRO is backwards compatible, that means mp3PRO-files can be played with common MP3-players. These files however sound very dull and rustled. In 2001 the new format was first presented to the public – now like WMA equipped with a watermark for copyright-protected files. Whether mp3PRO is to take the place of the worthwhile proven MP3 – no one knows; it’s advantages to portable MP3-players are obvious. Streaming capabilities surely prepare mp3PRO for the internet as well. This format is still being developed. A final release is expected for the end of 2001.

After MP3’s marvelous success especially with the internet-users, the limits of this new format unveiled quite soon: in lower bitrates MP3 rapidly lost quality although the file size was reduced remarkably. This is where AAC comes in. Also developed by the Fraunhofer Institut the format was meant to be MP3’s successor. However the aim was not achieved, even at 96 kbps a heavy loss of quality is noticable. Maybe that’s why AAC is hardly known anywhere, although it was introduced in 1999. Above all there are hardly any software-players that support AAC. Due to these restrictions AAC was not considered in these test.

One of the first audio-standards; WAVE-files are virtually of the same quality as data on audio-CDs and therefore offer the best quality. At the same time these files are very large (10 MB / min.), that’s why they are unsuitable for everyday exchange via the internet.